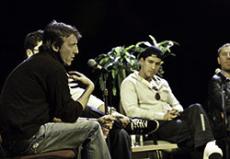 Aspiring actors and film industry buffs were treated to inside industry tips when they attended The Actor’s Expo on Jan. 20 at the Rio Grande Campus.

Students gathered in the Main Stage Theater at RGC to hear personal experiences from those in the business.

The panel invited questions from the students with Christine Haas, KVUE News anchor, serving as the moderator.

The event kicked-off with a photo opportunity with Lopez, who then introduced members of the panel, and explained how he got into acting as a child growing up in California.

The culturally diverse panel included Lopez, who was born to Mexican-American parents, Harlin, originally from Finland, and Reed, who is British. Harlin explained differences between European and American cinema 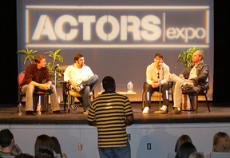 The panel gives the audience tips on how to land a gig in Hollywood.

Student’s questions covered a broad range of topics such as, “What is the trick to getting an agent?” and, “How has the recent writer’s strike affected the panel members?”

Michael Ortiz, a radio, television, and film major at the University of Texas at Austin, skipped work and came to the event anticipating hearing Reed talk about what it takes to become an agent. Originally from Houston, Ortiz said, “Austin attracts more film [than Houston]. It’s a more indie culture.” Ortiz wants to apply to ICM when he graduates in May.

When asked what he thought about the Austin film scene and whether it is promising for up-and-coming actors and producers, Harlin described Austin as a vibrant place because of the university.

However, Jam claimed, “Texas is not as promising [as other film cities] because incentives are not so great.”

In contrast, Lopez stated, “You guys are fortunate that Austin does a lot of work; films a lot of things. Fortunately, this is a great town that provides a lot of opportunities.”

The Expo gave the panel members the opportunity to promote some of their latest projects. Harlin is producing a movie in New Orleans called, “12 Rounds” with Twentieth Century Fox and is currently casting all types of parts.

Lopez is producing a show called, “Salsa in the City,” similar to the hit television show “The Hills,” but set in the salsa subculture. He said he will play a character on Broadway if he can manage the work for the six to eight weeks shows typically run.

In the end, Lopez left the audience with advice everyone, not just actors, can take to heart: “If you want to get into it because it’s your passion, then go for it. Take advantage of all the opportunities.”